Citizens must influence policy! This was the strong message from CEO of Caribbean Climate Smart Accelerator (CCSA) Racquel Moses as she discussed, “Unleashing opportunities of circular economy towards 1.5 degrees temperature goal” at the recently concluded Latin America and Caribbean Climate Week (LACCW) in the Dominican Republic. 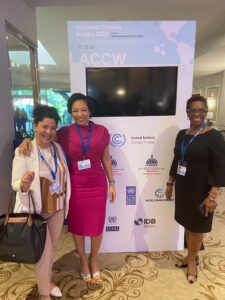 She was responding to the question of the kind of government policies that would help to accelerate efforts towards a circular economy. Referencing the 28-country coalition that CCSA represents, Moses noted, although policies such as banning single use plastics are ”useful” that, “…it’s beyond government policy”.

She reminded those present that citizens have an active role in governance and that they are empowered with the right to steer policies by promoting “the right kinds of activities and behaviours” and asked, “What kinds of policies are we encouraging and advocating for?”

The idea of the circular economy is often captured in the maxim reduce, reuse, recycle, but also extends to the idea of designing products with a zero-waste goal in mind and using renewable energy for production.

A proactive movement especially among Gen Z-ers worldwide and evident mainly on TikTok, exemplifies Moses’ call for citizen action. The hashtag #ecotok has over 530 million views and is used by many of them to advocate for and demonstrate zero waste “hacks”.

As Moses reiterated, “it’s more about how do we think differently, to do things differently ourselves, and then influence government policy, on behalf of the collective, understanding that we are empowered as the government.”